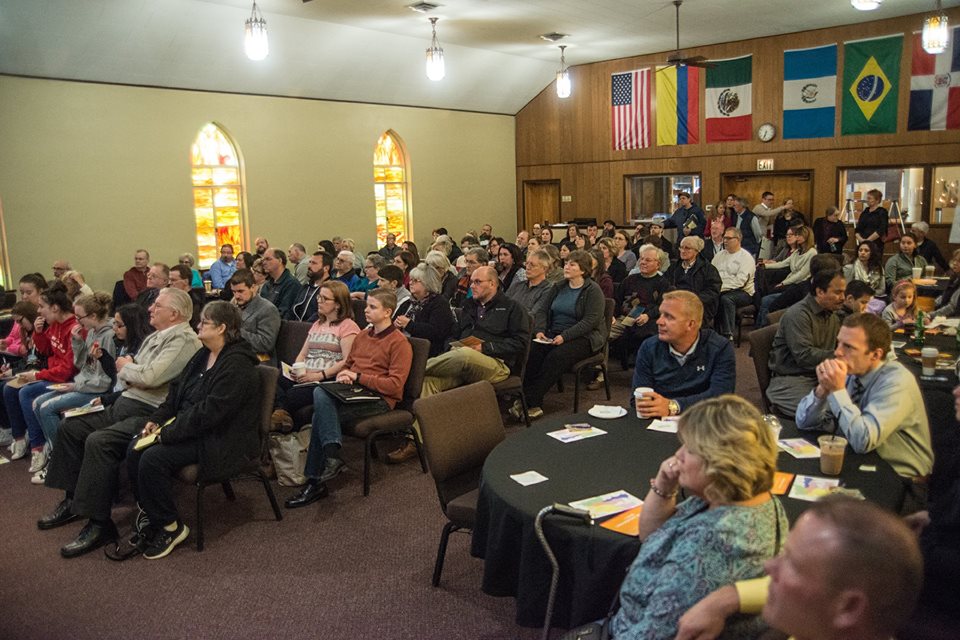 On Tuesday, April 10, 2018, more than 110 people gathered at Intersection Coffee Shop to learn more about the next phase of Logansport’s Hometown Collaboration Initiative (HCI).

“Logansport Re-Imagined: Creating A Uniquely Better Community” is the capstone project for Logansport’s HCI. A diverse team of leaders has worked with coaches from Purdue, Ball State and the Indiana Office of Community and Rural Affairs to develop this customized approach to placemaking in Logansport.

Logansport has completed a number of placemaking projects over the years, from the signature pink flowers downtown to parks, trails and plazas and public art. The team analyzed information from the community survey completed in December 2016 and the Community Forum in January 2017 and determined that Logansport residents believe building community and increasing community pride is a pressing need.

Working from the statewide HCI goal of empowering people to commit to making a difference in the community, both now and in the future, the team developed the following vision for Logansport’s HCI:

The people of Logansport are actively engaging in creating and promoting Logansport as a community where they are proud to live, work and play.

At the Logansport Re-Imagined Kickoff on April 10, core team leader Zach Szmara invited attendees to join Logansport’s HCI team in working together to ‘create a uniquely better community.’ “The easiest way to think about community is by threads,” Szmara told those at Tuesday’s meeting. “You can dump a million threads on a table and you get nothing. It’s just a mess. As long as they stay independent and not interdepedent, they never amount to much. But if you take threads and you weave them under, over, around and through, the more they push together the stronger they are, the more vibrant the pattern you can make is…I believe Logansport has that potential. You’re an individual thread, but the more we engage together, the stronger we are. I know Logansport isn’t perfect, I know that we have weak spots, I know that we have tears in the fabric. We as leaders, we that care and are proud of our community, we go to those places where the fabric is weak, we go to those places where tears have begun, and we weave ourselves in to strengthen those areas.”

Residents are invited to join Neighborhood District Teams that are based on the existing city council wards. At Tuesday’s meeting, neighbors began conversations about ways to strengthen the existing assets in their neighborhoods.

The next steps in the process will include a chance for those interested to learn together. The HCI Team has organized a Speaker Series that will take place April 24, May 1 and May 8. Topics include “The What and Why of Placemaking and Neighborhood Engagement,” “Creatively Engaging Our Community” and “Project Implementation: Moving From Ideas to Action.”

The events will take place from 6:30 to 8 p.m. at Intersection Coffee Shop and will include time for neighbors to talk about what they’ve learned and how it might apply to their neighborhoods.

Throughout the summer, the neighborhood teams will work with the HCI team to identify and implement projects that make their neighborhoods uniquely better.

Registration for the Tuesday, April 24 event, “The What and Why of Placemaking and Neighborhood Engagement,” will open one week prior to the event. Those planning to attend are asked to register to help plan for seating.

A video from the event can be found here.

This article was originally published in Cass County Online on April 11th, 2018.